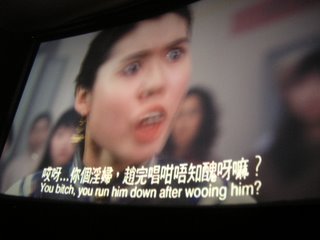 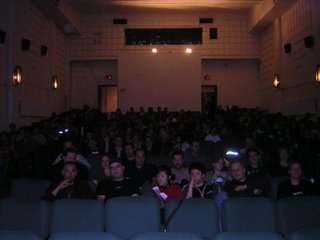 Your passionate pusuit of your "hobby" has always been an inspiration to me.

I have always admired your dedication to your love of film, and your desire to share it with everyone else. So few people take what they truly love, and make a living from it.

From Camden East backyard summer movie parties -- to a fanzine -- to Golden Harvest Cinemas -- then Kung Fu Fridays and Midnight Madness -- I have watched you move forward regardless of obstacles, and do what you want to do.

I have thought of you often as I've tried to follow my own passion, and make a career out of it.

But taxidermy fizzled out -- so now I make cartoons.

Love ya man! Best of luck in whatever the fates bring you.

TV waves? Huh? Look again, that is off a projected 35mm print. no video here ONLY PURE FILM!

the passion, the persistence of fascination and delight...

moments, nostalgia is stronger than the now,
but those moments are transient,
then you're caught up in it again.

Major bummer... Kung Fu Fridays rocked... so does The Royal.

Hey Colin I just found this blog, had no idea you had one.

I've met you a few times at the Film Fest, and I am also a former employee of Jerry, having worked at the Fox for a few years in the early 00's.

Anyways, I had some questions for you... if you wouldn't mind dropping me an email I'd really appreciate it.