I came across some ads in back issues of the International Film Guide that I thought were neat, and scanned them. Excuse the scan quality on a couple of them. 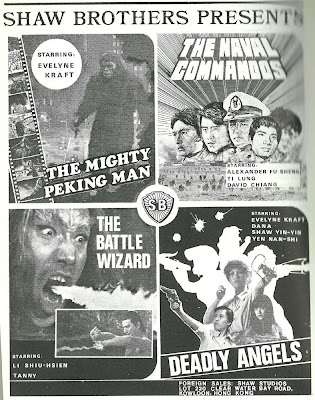 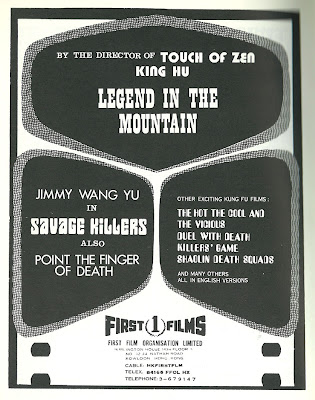 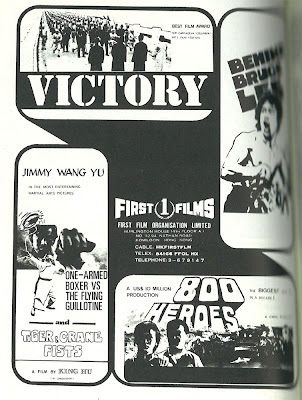 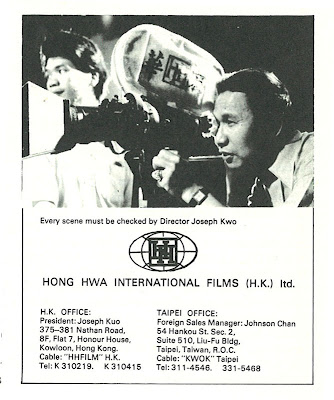 with a funky score, anything is possible

And here is an LP cover from some other Bollywood knuckle duster: 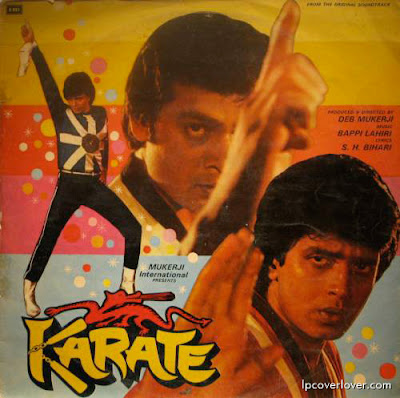 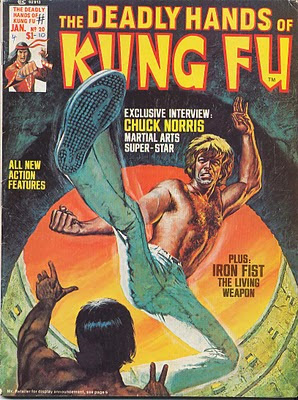 Years ago, I did an interview with Teddy Robin Kwan when he was at the Toronto International Film Festival for the premiere of Temptation of a Monk, the Clara Law film he produced. Before becoming an actor and producer, in the 1960s he was in a popular band called Teddy Robin & The Playboys. During our chat he told of being in a rock band in the 70s that toured Canada and took him to places such as Thunder Bay. Well, a photo has surfaced of that band! Behold: 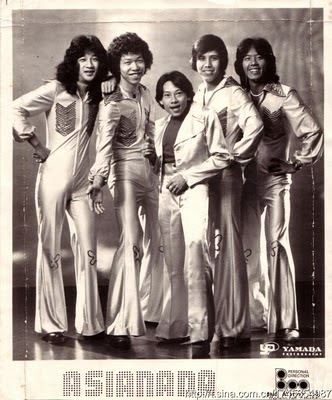 Found over at Yvonne's blog Webs of Significance, a great roaming camera blog that breaks out of HK's urban confines, comes these pics of a closed cinema in Cheung Chau. It might be familiar to contemporary HK film fans as a location from Riley Yip's Just One Look. I've overlooked that film and now from reading up on it, I need to seek as I am intrigued by how it sounds like a love letter to HK cinema from the 60s/70s plus has some of my favourite actors including Anthony Wong and Eric Kot. 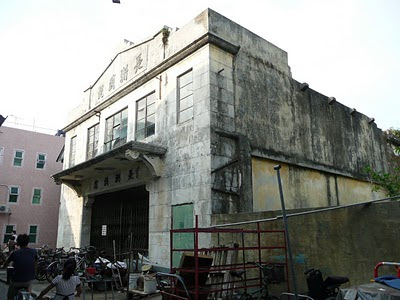 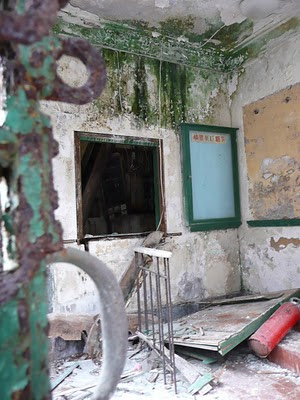 As some of you Kung Fu Fridays regulars will know, I had amassed a decent collection of 35mm prints of Hong Kong feature films over the years, rescuing them from closed Chinatown cinemas and in some cases, from the garbage. In March I donated a number of those prints to the University of Toronto and this Saturday, they are holding a FREE screening of two of the films to celebrate the donation. In between the two films will be a discussion about the films and their directors, plus a dim sum snack will be served! If you want to beat the heat, what better way to do so than by sharing in laughs and chills from two rarely screened Hong Kong films! And again, it's F-R-E-E!

Hoping to see some of the familiar faces from Kung Fu Fridays out for the evening!

Supernatural romance and shenanigans abound in Esprit D'Amour, a funny and even tragic romance directed by master filmmaker Ringo Lam (City On Fire, Full Contact). Alan Tam is Ming, a mousy insurance agent engaged to spitfire fiancee Ivy (Cecilia Yip). When investigating the death of the young and pretty Siu Yu (Joyce Ni), Ming meets and falls in love with Siu Yu's spectral form. Siu Yu wants her life insurance delivered to her beneficiary (a five year-old boy), and the charmed Ming is only too happy to go along. But falling in love with a ghost is sure to arouse some suspicion, and when the scheming Ivy catches on, Ming's ghost-man love affair may be in jeopardy. Mixing romance, comedy, drama, and a touch of supernatural tragedy, Esprit D'Amour is wildly entertaining and compelling example of Hong Kong cinema entertainment.

Five years before their now-classic romantic pairing in The Killer, Sally Yeh and Chow Yun-Fat starred in this 1984 horror-comedy hybrid from director Ronny Yu (The Bride with White Hair, Fearless). Yeh stars as a wide-eyed Canadian college student named Angie, who comes to Hong Kong to do some field research for her study of Chinese superstitions. She gets a bit more than she bargained for when she rents an apartment haunted by the spirit of a spurned singer. As if fending off ghosts wasn't bad enough, Angie also has to deal with the unwanted affections of a sleazy con-man (Raymond Wong, All's Well Ends Well), as well as the sweet-talking detective (Chow) who vows to solve her supernatural case. Chow requires a little otherworldly help of his own after Angie's body is taken over by the ghost, who's hell-bent on reenacting the murder-suicide that ended her life. The Occupant's evenhanded mix of Creepy and Crazy foreshadows Yu's later work on American horror flicks like Bride of Chucky, and although Chow is operating largely in comedic mode, his role as a fearless police detective looks forward to his later heroic bloodshed collaborations with John Woo. But this is Sally Yeh's show, and her wonderful split-personality performance as a naive student of the supernatural possessed by the ghost of a sultry singing chanteuse is what ultimately makes the film a success. (synopsis from www.yesasia.com) 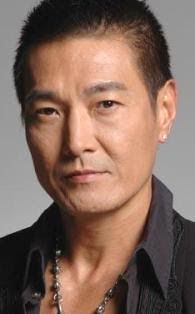 And in the bottom of that last story I linked to:

Interestingly, while Chan's celebrity parents have spared no expense to make their son happy, one of Jackie Chan's former employees, William Duen, claimed they were misers and mistreating their employees.

Duen claimed that the kungfu star fired his former right-hand man, Kenneth Lo, right after he appointed his wife Lin as head of his two entertainment firms JCE Movies and JC Group.

Duen, who was also fired after Lin's appointment, accused Jackie Chan of being "a heartless boss" when he spoke to Hong Kong reporters last week.

Lo, who had no other experience other than being a martial artist and bodyguard, is reportedly still unemployed.

Not meaning to bash Jackie, but there is also this story: Jackie Chan a ruthless boss? 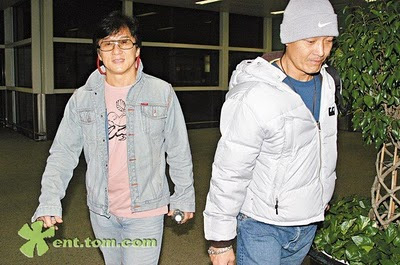 And here is a fan tribute to Ken Lo, bodyguard and an astounding and underrated martial arts actor:

"Action superstar Jackie Chan has bought one of Michael Jackson's silver gloves for US$250,000 (S$352,000) for his son Jaycee Chan at a charity auction, reported Hong Kong media."

And in related webcrawling, here is a pic of Jackson in costume when he visited the Shaw Brothers Studio on a trip to Hong Kong in 1987. (via shawbrothersreloaded.com) 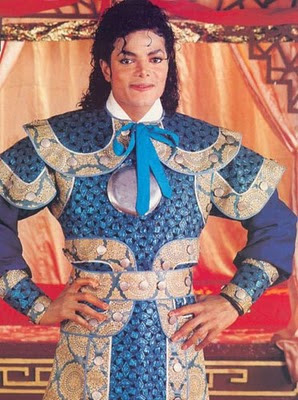 And then there is also the lifesize Bruce Lee statue in MJ's private arcade wearing his owner's hat. 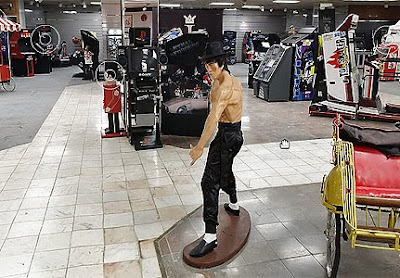 Glorious tribute to old school kung fu comedies. It took HK long enough to do this! I missed this in HK and can't wait to catch up with it.