Okay, so HK is not my home. But I miss it so right now. At this point last year I was visiting for my 4th time. I was scheduled to go but cancelled my trip since I had much to catch up with here in Toronto. Now I read of the things I could have been doing and seeing as we get yet another dumping of snow. Boo-hoo...

Going to turn this around and share some of the pics and things that I didn't pull out after I got back last year. First up is this pic of a grisly HK comic from the 70s that I saw in one of the maze like pop culture malls on Nathan Road. More to come... 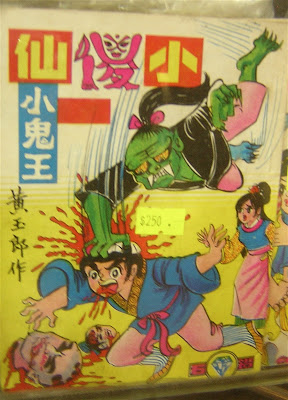 Is that comicbook an adaptation of Condor Heroes? The markings on the severed heads resemble the Baigyu Fist technique, which I just realized is being used on the hero (I thought his head was being smashed by a rock). The ghoulish figure could easily be Sister Mei (I forget the rest of her name) and the two kids, Guo Jing and Huang Rong. Just finished the first 19 episodes of the 1983 version of Legend of, so this stuff is still fresh on my mind...

Thanks for pointing that out. He just might have something there as the finger size holes on the heads could be the work of Iron Corpse, Mistress of the White Eagle Claw! Check my review of the TV series (that I am still only half way through) over at Twitch Film.
Posted by Colin at 12:40 PM 1 comment: Michael Hui visiting Tsui Hark during lunch break, and gives him his suggestions. 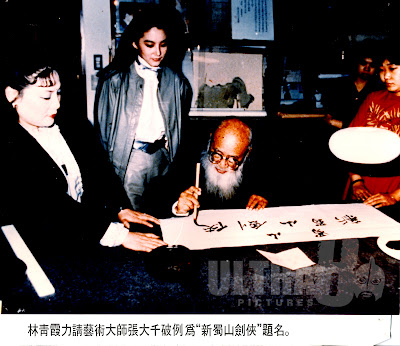 Brigitte Lin Ching-Hsia observes famous Chinese painter Zhang Daqian write the calligraphy of the title of ZU, which will eventually be used for the title font on all publicity materials and on screen.
(there is an emphasis on how it's unprecedented for Zhang to do something like this) 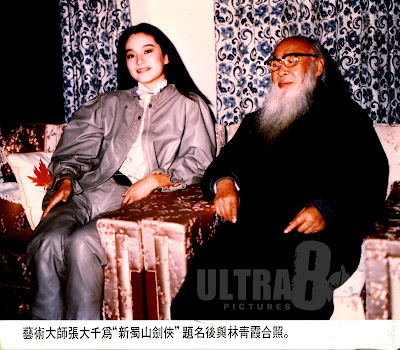 Famous Chinese painter Zhang Daqian sits with Brigitte Lin Ching-Hsia after contributing the calligraphy for Zu: The Warriors from the Magic Mountain
Thanks to Alice and Grace for translation help!
Posted by Colin at 2:01 PM No comments:

trip the fu fantastic in Portland...

Only at the Hollywood Theatre, The Grindhouse Film Festival presents a Grindhouse Double Feature! With incredibly rare 35mm prints of Yuen Woo Ping’s kung fu masterpiece Snake in the Eagle's Shadow and Lucio Fulci’s gut ripping gore fest The Beyond! There will also be a multitude of rare 35mm Grindhouse trailers before each movie! Plus, exciting giveaways!

This is a true double feature, two movies for the price of one: $6.00 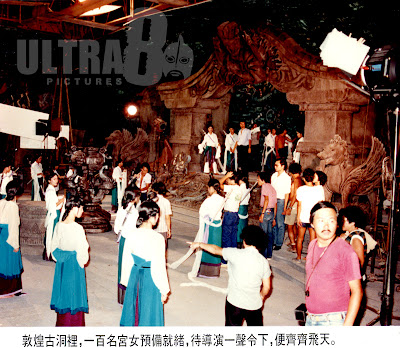 100 maidens are waiting on cue from the director to perform the "Flying to the sky" scene in the ancient cave of Dun Huang.

You can see Tsui Hark in the centre of the archway and the man in the red t-shirt at the bottom right corner is cinematographer Bill Wong Chung-Piu who also shot: THE SWORD; ONCE UPON A TIME IN CHINA; and ROUGE, amongst others. He now lives in Toronto primarily shooting for television (Relic Hunter), but he was the DOP for the under rated Canadian sci-fi comedy, TOP OF THE FOOD CHAIN starring Campbell Scott. (thanks to Alice for the translation)
Posted by Colin at 4:28 PM No comments: 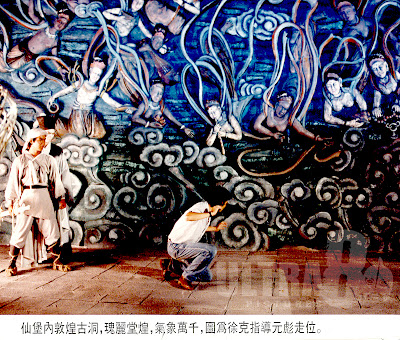 So for awhile now I have been promising to treat you to some of the goodies in my poster/lobbycard collection. The other day I was at my storage space and came across these... Okay, you only get one for now, but that is because I need Chinese translation help! Anyone out there decipher the caption at the bottom? I have twenty more behind the scenese shots from Tsui Hark's (crouching in the foreground of the photo) ZU: WARRIORS OF THE MAGIC MOUNTAIN, but want some context for them. Anyone up for the task?

and we have a translation! thanks Alice!

and over in Beijing

More scouring of the world wide web has turned up these pics of an old cinema in Beijing.

Visitors gather at the entrance of Daguanlou, a century-old movie house in Beijing Dec. 23, 2005. The cinema, located in central Beijing business district, has witnessed the development of Chinese film industry, and is listed in the Shanghai Guinness Book of World Records Friday for its pioneering film screening business. Found this pic over at a BBC report on African cinemas. Sadly, none of the links to the pics of the cinemas seem to work...
Posted by Colin at 3:01 PM 1 comment:

The God And The Demons Of Zu Mountain?! Zu Mountain Saga II?! Marc Walkow over at Outcast Cinema sent me this link. I am just in the middle of the English sub-titled TVB series, The Legend of the Codor Heroes, The Return of the Condor Heroes and the Duke of Deer Mount and then I discover this? Thank God they are not subtitled or I would see even more of my leisure time disappear! And starring Aaron Kwok?!! Here are the opening themes for the series and 9 minutes of one of the episodes with no subs. 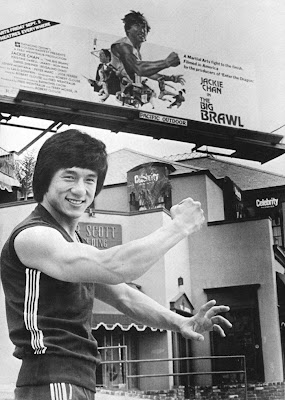 Was going through a pile of manila envelopes that I rescued sometime back from a closed Chinatown cinema and found a stack of photos from the film, ANGELS OF THE REAR CHAMBERS. I do think the double entendre is accidental. And yes, the provincial censor board slapped this little sticker on the photo. I have some more photos with eye popping nudity, but wanted to keep this blog PG... 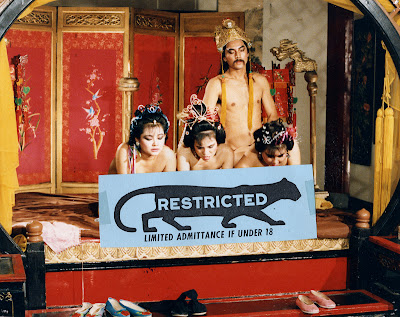 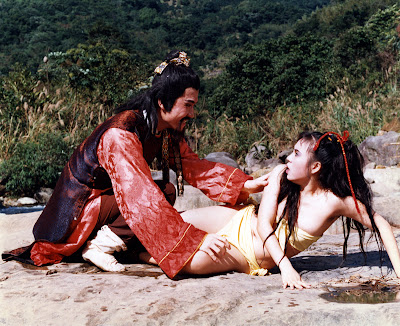 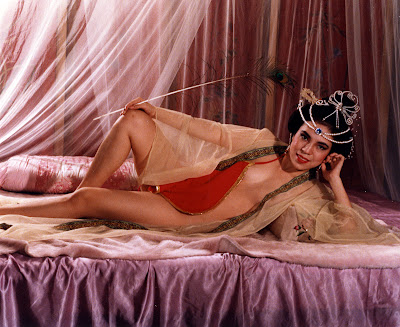 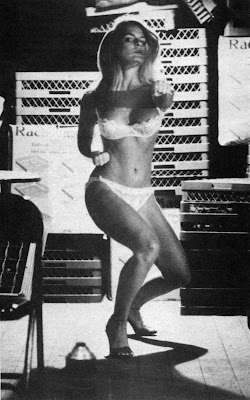 Here is another image I found flipping through mags that just might distract you this Friday afternoon. Behold Jillian Kesner from FIRECRACKER, an action flick from the Philippines directed by Ciro H. Santiago, the director of T.N.T. JACKSON, SHE DEVILS IN CHAINS, HELL HOLE, THE MUTHERS, VAMPIRE HOOKERS, CAGED FURY and more mind blowing B-goodness... Jillian was also married to famed DOP, B director and pal of Orson Welles, Gary Graver who passed away in Nov of 2006. Been meaning to do a posting of him over on my Popcorn blog.
Posted by Colin at 2:17 PM 2 comments:

Been gone for several Fridays. Nothing kung fu related, but I did see an hour of that bloated mess called THE PROMISE. Ick...

Going through old issues of "Martial Arts Movies" and found this image. Want to hear the song? Jump over to the posting at Andrew Dubber's blog, The Wireless. Anyone have a polyphonic ringtone of the theme that they could send me and it would match my Wong Fei Hong cell ring? 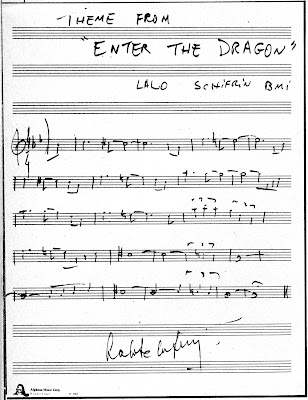