clips of the lost condors... 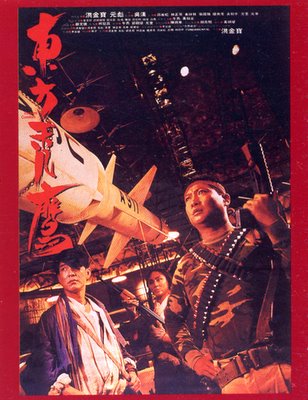 EASTERN CONDORS, Sammo Hung Kam-bo's martial arts action bash up inspired equally by THE DIRTY DOZEN and THE DEER HUNTER, is quite the spectacle for fans, but was considered a bit of a box office bust when it was released. The film has screened several times at the Kung Fu Fridays series and is a favourite with the audience, due to the non-stop action of the last few reels and the fact that the film is a veritable "who's who" of martial arts cinema including: Sammo Hung (ENTER THE FAT DRAGON, SPL); Yuen Biao (PRODIGAL SON, DRAGONS FOREVER; Yuen Wo-ping (SNAKE IN THE EAGLE'S SHADOW, IRON MONKEY, THE MATRIX); Corey Yuen Kwai (YES, MADAM, THE TRANSPORTER), Lam Ching Ying (PRODIGAL SON, MR. VAMPIRE), Yuen Wah (KUNG FU HUSTLE); Moon Lee (ZU: WARRIORS OF THE MAGIC MOUNTAIN); Joyce Godenzi (Sammo's wife, LICENSE TO STEAL); Hsiao Ho (MAD MONKEY KUNG FU); Dick Wei (SEVENTH CURSE); Yasuaki Kurata (LEGEND OF A FIGHTER); and Billy Chow (FIST OF LEGEND, just to name a few!

Now here is the payoff to this posting... Long rumoured, clips of an amazing showcase to promote the film's release with an astounding demo by Sammo, Biao and Wah! Done as part of the Miss Asia Pageant 1987, some kind soul has put two clips up on www.youtube.com. Behold:

And if you are interested in seeing the whole thing, just fork out $5.74 CDN for the VCD at yesasia.com, and no this is not a payola plug, but if they want to send me free stuff, go for it!

Here is another clip that I found of Sammo from TWINKLE TWINKLE LUCKY STARS, one of his action comedies from the eightes, and also the action and romance packed trailer for DRAGONS FOREVER, with co-stars Jackie Chan and Yeun Biao.

And here how Sammo looks like today in these snaps I took of him at the world premiere of Wilson Yip's SPL at the 2005 Toronto International Film Festival (now that one might be a shameless plug...). SPL certainly shows that the man hasn't lost his powerful skills. (Trailer for SPL and one clip and another...) 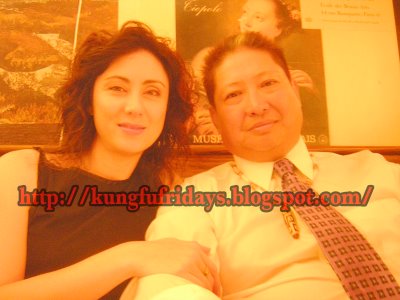 Sammo and his wife Joyce Godenzi 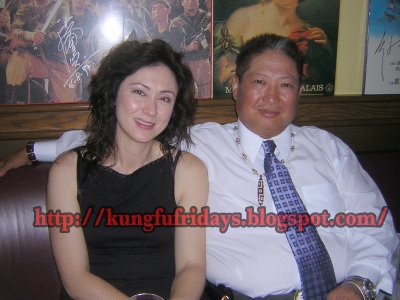 (note the poster for EASTERN CONDORS in the background which
he signed when I got to meet him briefly in Boston in 1997)
These cell phone pics were taken by someone and posted on the internet - if you took them and happen to read this, let me know who you are and thanks for recording one of the best moments in my life! 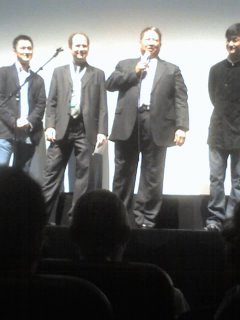 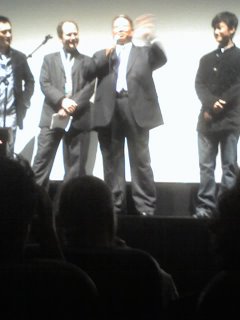 After the screening, Sammo was presented with this beautiful portrait of his character in SPL by the kung fu comic wunderkid, Kagan Mcleod. If you haven't bought his comic, INFINITE KUNG FU, do so NOW! 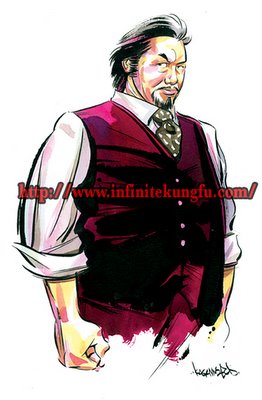 If you live in the Toronto area and want to see Sammo in his youthful prime, come see ENTER THE FAT DRAGON at the March 24th edition of Kung Fu Fridays.

So when can we expect to see SPL at the temple ? :D