Lost Secrets of The Royal

I just came back from the reception at A-Space Gallery for "Lost Secrets of The Royal" that showcased two of four installations made from odd reels of 35mm Hong Kong films that I rescued from Toronto's The Royal cinema back when it was the Chinese cinema, The Golden Princess.

While I donated many of the complete prints to the University of Toronto, but with the odd and incomplete reels, I donated it to the Liaison of Independent Filmmakers of Toronto (LIFT) with the stipulation they be used and recycled. The Toronto Reel Asian International Film Festival, of which I sit on the advisory board, commissioned four installtions with LIFT that were unveiled at this week at the festival. You can read more about it here. 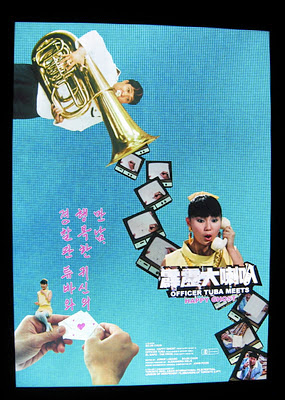 I really loved the two pieces, "SNAKE'S SHADOW" and "OFFICER TUBA MEETS THE HAPPY GHOST" Both artists "got it" in my opinion. Well done! If in Toronto, go see it! I hope to post more photos from the show later this week.