the ultimate in kung fu... 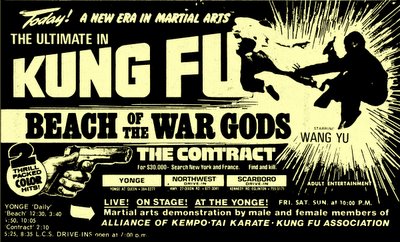 I quickly wanted to pop up another post as it looks like I am getting lots of hits after pointing Twitch Film to a link for a silly short film starring Sam Rockwell as Batman.

Above is a newpaper ad from the Toronto Sun circa January 11th, 1974, the glory days for seeing kung fu films in cinemas in North America. An awesome double bill plus a live martial arts demo! Starring Jimmy Wang Yu, BEACH OF THE WAR GODS is pretty fun, but imagine it on the big screen with a rowdy audience!

I took the ad as visual inspiration for the poster below which I designed for one of my early early kung fu film screenings, ENTER THE FAT DRAGON starring Sammo Hung. This was in 1998, when the shows where held on the University of Toronto campus and on a Saturday, before the film series got a regular cinema it could call home. I took the cartoon image of Sammo from the lobbycard for the film. The screening was a success and has been a beloved staple of the cult film experience in Toronto. 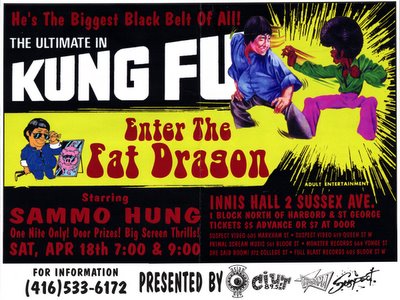