The Streetfighter calls it quits!

Old news as Sonny Chiba announced his retirement in July, but my blogging was on hiatus for the summer, hence the belated notice. At 68, Chiba is still possibly the most recognized Japanese actor world-wide. Any other takers?

Chiba-san has always been proactive in helping new talent with his Japan Action Club (JAC), which was responsible for training Hiroyuki Sanada (THE LAST SAMURAI, SUNSHINE, RUSH HOUR 3, NINJA IN THE DRAGON'S DEN, ROYAL WARRIORS, MESSAGE FROM SPACE) and taking applications for a Japanese branch of his LA-based acting school, as well as join with Hong Kong action legend Jackie Chan to launch schools for future action stars in Beijing and Shanghai.

In 2001 I was lucky to serve on the jury of the Yubari International Fantastic Film Festival which was chaired by Sonny Chiba, with fellow jury members, OLDBOY star Choi Min-sik, GAMERA and DEATH NOTE director Shusuke Kaneko, and Tchéky Karyo, star of LA FEMME NIKITA and KISS OF THE DRAGON) and he was a gracious man who exuded a powerful charisma. Quentin Tarantino visited the Fest a number of years before, hence the name of Chiaki Kuriyama's character Gogo Yubari in KILL BILL. Below are some pics from the Fest as some Chiba Youtube selections. 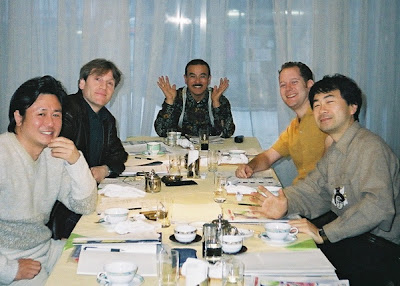 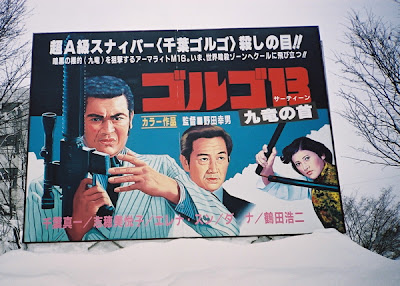 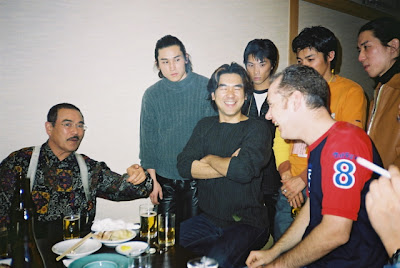 An audience with the master: Sonny Chiba and VERSUS star Tak Sakaguchi,
director Ryuhei Kitamura and Colin Geddes 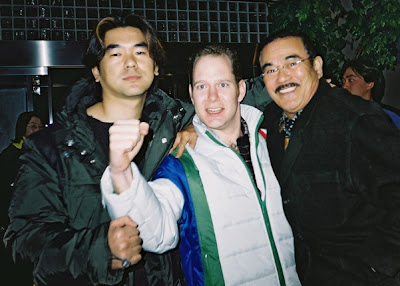 VIVA CHIBA! The Bodyguard!
Posted by Colin at 2:48 PM No comments:

Italian Gore fans waiting to see DEMONS 2 at a screening in London, Ontario, got the surprise of their lives as CURSE hit the screen during the trailer portion of the evening. A hidden security camera caught all the insanity on MiniDV. Does ANYONE have a video of this film? I know where there is a full 35mm feature of it, but sadly the reels won't fit in my dvd/vhs player...