I have had this little story in my email inbox for a month waiting to share it with you all. It comes from cinema supporter Dennis Bartok:

Did a Q&A last night with John Saxon in between screenings of ENTER THE DRAGON and NIGHTMARE ON ELM STREET at the Aero Theatre in Santa Monica, which the Cinematheque now operates. What a guy ... He said of the 150+ movies he's made and all the actors he's worked with from Brando on down, he's been asked more questions about Bruce Lee than everyone else combined. I said, Don't worry, John -- I'm sure that in the next world Bruce Lee is tired of getting hassled by people coming up to him saying, "Hey, you worked with John Saxon didn't you?!" He laughed his ass off. 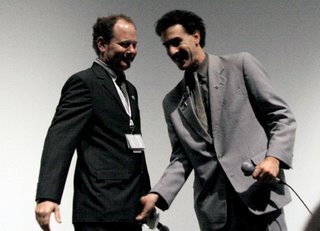 I disappeared for awhile, but to answer the question of where I went, simply do a search for "Borat + Toronto" on youtube for a general idea.

or for another take on the story read this

The order of the evening went as so:

and now I am part of a viral marketing campaign...
Posted by Colin at 11:53 AM 2 comments: