DO NOT get me this for Christmas or my birthday. EVER.

Siu Lung is a fun loving Kung Fu boy who loves to practice his kata. This Asian doll is 14 inches tall with hi-quality vinyl head, arms & legs connected to a cloth body and stuffed with fine polyester fiber fill. His hair is closely rooted and has been given a typical bowl hair cut, and his all cotton top is emblazoned with the Chinese charaters "Kung Fu". Siu Lung, with his disarming smile, is ready to protect with an array of chops, blocks & high kicks. He presently ships within the U.S.A. 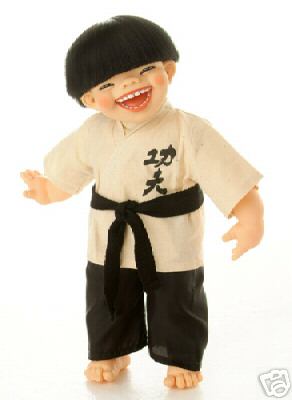 my yoga is better than your kung fu...

Here is an interesting skeleton from the closet of Donnie Yen - MISMATCHED COUPLES, truly a product of the 80s from HK. Yuen Wo-ping directs and stars in this silly breakdance fu farce. Not avail on dvd I don't think, only VCD. Check out this review over at Dragon's Den UK:

Eddie (Donnie Yen) is an athletic breakdancer who boasts his skills among the youths of 80s Hong Kong. Living with his older sister and young cousin (May Law), Eddie's one dream is to impress the glamorous girl he constantly meets at social events. (click for more)

Looks like Donnie traded the make-up for a permatan in SPL. This film was actually on the schedule for Kung Fu Fridays until the closure of the Revue/Royal ended the series. I got to meet Donnie last year in Hong Kong and over drinks, you should have seen his face when I told him I had a print of it! We were talking about the possibility DRAGON TIGER GATE playing in Midnight Madness at the Toronto International Film Festival, and I joked that if he didn't attend, I would show COUPLES instead... 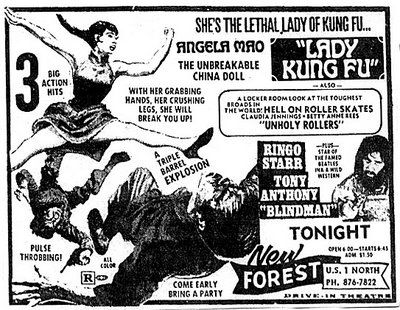 yes, a pint size imitation of the the dragon...

Just popped 22 posters from my collection up on ebay. To view them all on ebay, click here. Here are some examples of this latest batch: 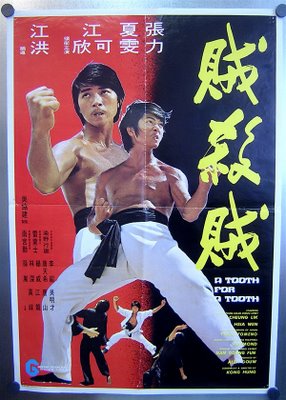 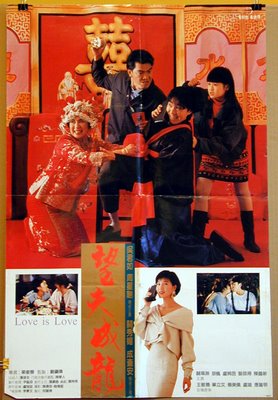 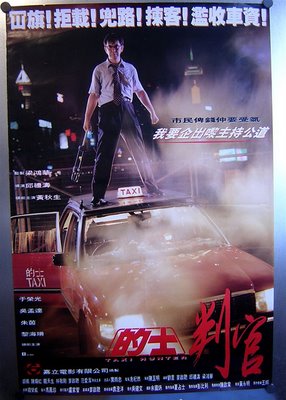 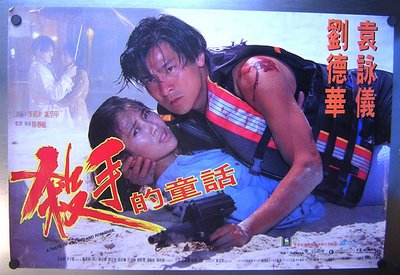 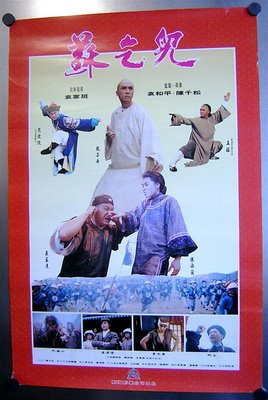 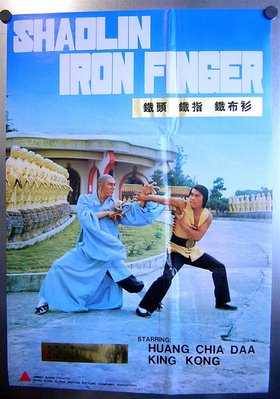 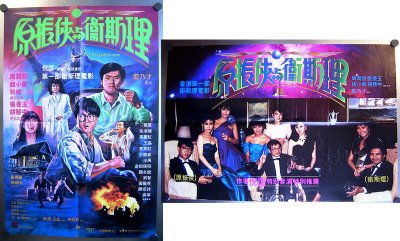 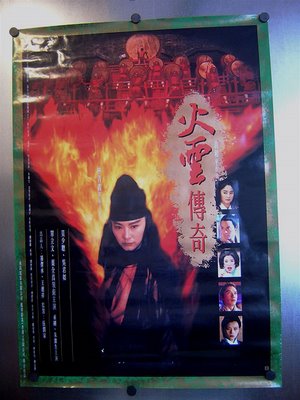 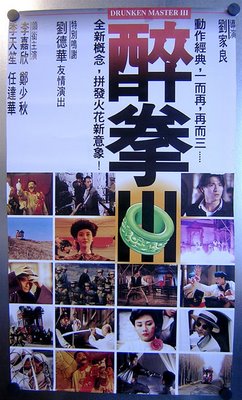 the monkeys are back! 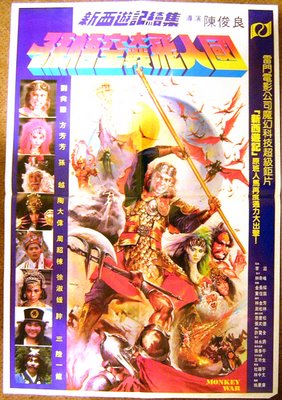 Been quite some time since I have posted some monkey fu images. Here you go... 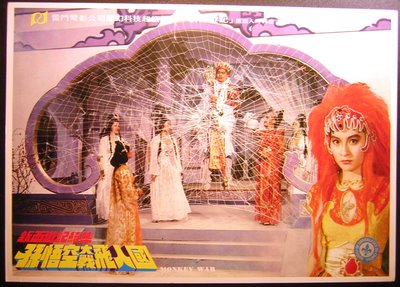 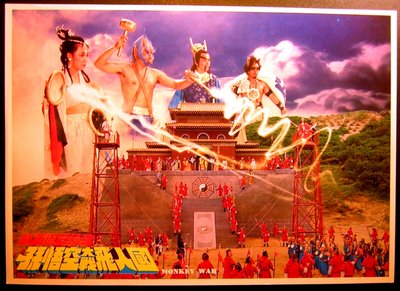 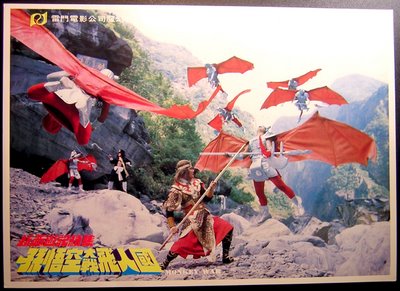 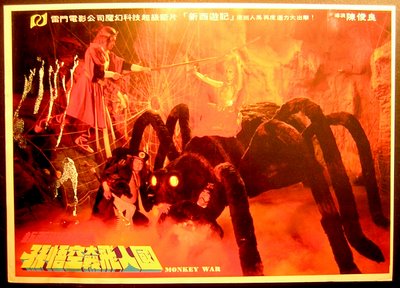 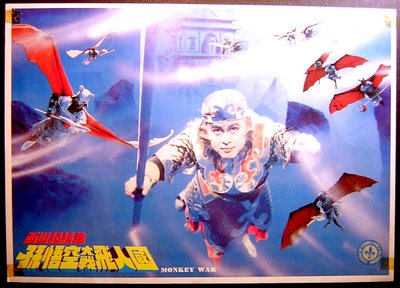 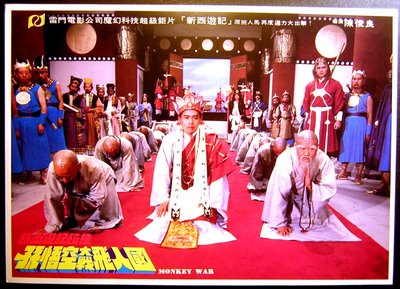 in case you have been confused in the past

Doesn't this make your skin crawl? "How to Spot a Jap." Click to see the whole book over at www.ep.tc.

old vid, but if you haven't seen it. featuring clips from Two Champions of Shaolin...

your prom date is here...

Yikes! How did this guy become an action superstar? Swing over to Brian's Asian Cinema - While on the Road blog and read about his trip to a little shop in a HK mall that simply sells photos of stars. Wonder what the going price is on those posters of Richard Ng and John Sham that I found while routing through my posters today... Besides links to more CYF photos, he also has some great pics of Japanese yakuza posters. And of course, visit his great site, HK Cinema - View From the Brooklyn Bridge, a great spot to figure out names for faces in the HK film industry. (Brian - I'll add your blog and site links to the blog when I update my template)

Dr. Klahn has left the building... 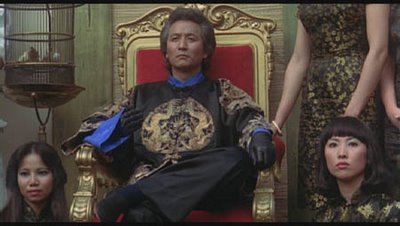 I just learned from From Varietyasiaonline, actor and hapkido teacher Bong Soo Han has passed away on January 8th, 2007. Visit Grand Mater Bong Soo Han's International Hapkido Federation. Wonder if he and Master Hwang In Shik ever got in a scrap...

On July 4, 1969, Bong Soo Han was performing a demonstration at a park in the Pacific Palisades, California. In the audience was Tom Laughlin. After a spectacular demonstration, Laughlin approached Han about being involved in a movie project called Billy Jack. In this film, Han gained critical acclaim for creating and staging some of the most breathtaking and realistic fight sequences ever to have graced the silver screen. Up to the release of this film, brief references to martial arts were often portrayed by actors and not by martial artists. Han redefined and revolutionized Hollywood's understanding of martial arts by demonstrating a level of martial arts skill previously not seen before, much to the delight of the audience who found it tremendously exciting. With one movie, Han had introduced Hapkido to the world.

Grand Master Bong on the set of BILLY JACK with Tom Laughlin
He has continued to choreograph, double, star in, and/or produce numerous films since. In 1977, he played the evil Dr. Klahn in the segment A Fistful of Yen in the spoof film, The Kentucky Fried Movie.

In addition to being cited in dozens of martial arts books, he wrote many articles on the Way of martial arts, and also authored the book, Hapkido, The Korean Art of Self-Defense, that was published by Ohara Publications in 1974, which is now in its 23rd printing. He completed a series of ten instructional Hapkido DVD's which are in worldwide distribution.

On a side note, check out the "New Exit Strategy for Iraq" over at www.billyjack.com and learn "Why Iraq worse than Vietnam". Time to cue up "One Tin Soldier" and play it for the 21st century...
Posted by Colin at 12:57 AM No comments:

As a Happy New Year's gift, FREE tickets to a special screening on Tuesday, January 16th at 7pm of THE PROTECTOR (aka TOM YUM GOONG) starring Tony Jaa are being offered to all Kung Fu Friday supporters.

PLUS, to celebrate the official Canadian DVD release of THE PROTECTOR, the version screened will be the FULL LENGTH international cut, 27 minutes longer than the version that played cinemas in North America. That's 27 more minutes of furious flying feet and fists to the head!

HOW TO COLLECT YOUR FREE DOUBLE PASS

1. This is open to Kung Fu Fridays and Ultra 8 Pictures supporters. To be eligible, please make sure you are signed up to the Ultra 8 Bulletin: http://nomediakings.org/cgi-bin/dada/mail.cgi/u/cgl/

If you have any questions about the passes or pick-up, please email me.

ONG BAK made Tony Jaa a star, THE PROTECTOR will solidify his place among the action- hero elite. THE PROTECTOR reunites Jaa for the third time with the writer/director/producer of ONG BAK Prachya Pinkaew. In this relentless, fast paced action film spiced with Muay Thai moves, Kham’s (Jaa) life is turned upside down when a notorious Asian gang steals his family’s prized elephants, which were to be offered as a token of devotion to His Majesty the King of Thailand, and smuggles them to Australia. Kham must travel to a foreign land to unravel a conspiracy that will reach into the highest levels of the Australian government. With the help of a disgraced Thai-born police detective, he must reclaim his beloved animals and stay true to his heritage against almost impossible odds.

This release is part of the new DRAGON DYNASTY dvd series! Click here for details!

Check out the trailer here!

BIG Thanks to the folks at Alliance Atlantis, The Weinstein Company, Toronto Star, flow93.5, MTV Canada, Krudar Muay Thai, The Royal.
Posted by Colin at 12:43 PM No comments:

and the japanese way

Thanks to the efforts of another intrepid boy reporter, Jason Gray, I got this spiffy flyer for the Japanese release of ELECTION. Oh do they know how to package a violent gangland flick! 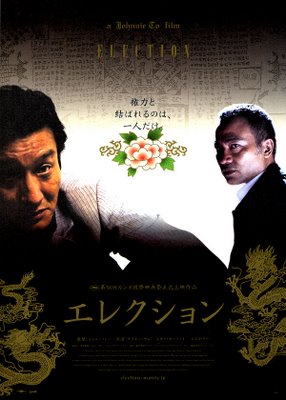 This pic snapped by boy reporter Nobu in the subways of Paris... 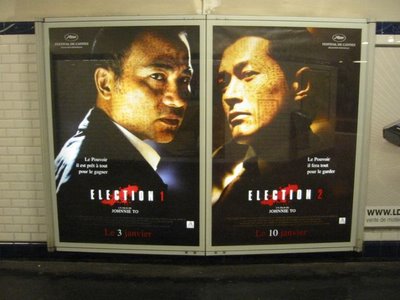 Here are a selection of more Shaw Brothers and Golden Harvest handbills I have found online. I love the old Shaw ones. 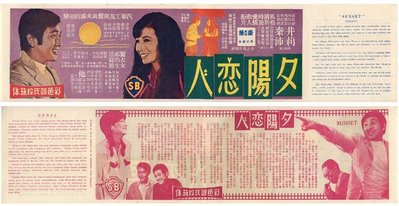 SUNSET starring Paul Chun, brother of David Chiang and Derek Yee, who has not been a leading man for some time... 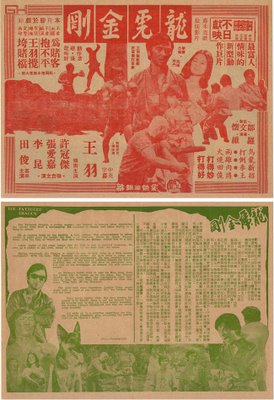 THE TATTOOED DRAGON starring Jimmy Wang Yu and Sylvia Chang in her first role! Just noting this as I watched her last night in King Hu's LEGEND OF THE MOUNTAIN and she was the very first HK star I met way back in 1991. 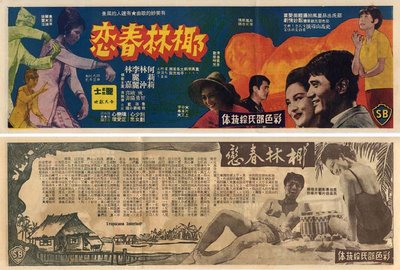 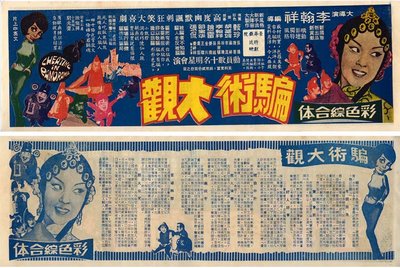 CHEATING IN PANORAMA
Posted by Colin at 2:06 PM 1 comment: 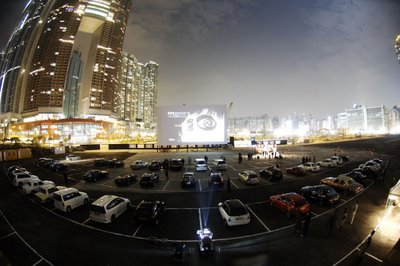 Just got this pic and link from a cinema enthusiast that I know in Hong Kong - their first (?) drive-in! Don't have a car? Fear not, they have 40 fixed seats in American classic cars! Plus, coming soon, an outdoor BBQ restaurant! It costs HK$100 ($15 Canadian) for the "parking fee" and the first "patron" and then HK$50 for the second "patron" and HK$40 for any subsequent patrons. So the maximum cost would be around $28CDN for a carload, however they are only showing one film, no double or tripple bills. And I have a sneaking suspicion that it is video projection too. Not knocking it, but I think they still have something to learn. You could have a tripple bill of A BETTER TOMORROW 1-3, CHINESE GHOST STORY 1-3 or INFERNAL AFFAIRS 1-3! That's a lot more exciting than their current feature that is running - NANA 2.
Or imagine getting caught in the middle of a Triad street gang fight while watching a YOUNG AND DANGEROUS marathon...

From kung fu disciple Marc in nyc. Maybe you will see Grandmaster Ron defend the virtue of a yound lady in distress...

Ron Van Clief, one of the first African-American martial-arts film stars, will discuss his career in a program accompanied by clips from the movies and TV shows in which he starred, choreographed, or served as stunt man including: Black Dragon, Super Weapon, Way of the Black Dragon, The Squeeze, Kung Fu Fever, Bamboo Trap, Fist of Fear, Touch of Death, Fight to Death, Berry Gordy’s The Last Dragon, Oz, Colorz of Rage, The Sopranos, Blazin, Coalition. Grandmaster Van Clief has trained in and taught martial arts for over 40 years and is a five-time World Champion.

vintage images so you don't think I am biased

Here are some great handbills that I found for some Shaw and Golden Harvest flicks on ebay from this seller. Click on them to see them BIGGER! 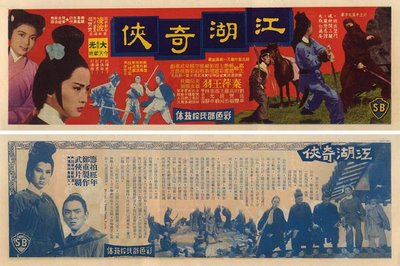 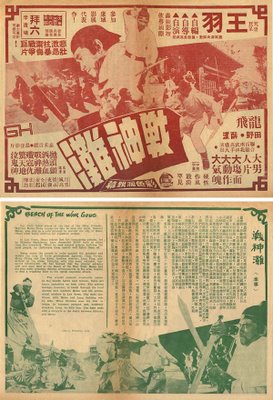 BEACH OF THE WAR GODS 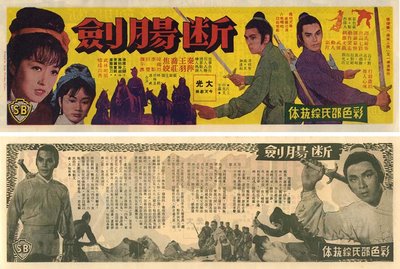 yes the auctions are up...

Including the below posted BLUE JEAN MONSTER and CRAZY SAFARI, I put a random assortment of doubles from my collection of HK posters up for sale on Ebay. You can access them by going here. My seller name is "ultra_8". Happy bidding! (click on the pics to see larger images)