This in from Grady Hendrix's fab blog Kaiju Shakedown:

Andy was giving a concert in Mainland China a fan broke through the security barriers to give him flowers and scream, "Wah Zai, I love you!" Andy shook his hand and then the security guards for the stadium jumped the fan and began punching and kicking him. Andy yells at them to stop, but they don't listen so...ANDY LEAPS FROM THE STAGE AND BEATS THEM UP. For real.

Read the full story and see the video of it here.

more thanks to Jonathan Ross

I had heard about this sometime ago, but only now catching up with it. In the post below I credited Jonathan Ross for pointing me into the jungles of HK cinema and in 2006 he returned to offer insight into the world of contemporary Japanese, Hong Kong and Korean cinema with his 3 part Asian Invasion series on BBC 4. Grateful to YouTuber kenada for posting these. If they happen to disappear, just do a search as I am sure they will pop up somewhere else.

Each of the three episodes has been broken up into around 6 parts to fit on YouTube. I am posting the first part and you can find the rest at kenada's channel. Here is the breakdown of the series:

JAPAN
Jonathan goes to Tokyo to see if Japanese cinema has gone off the boil, as some critics suggest. He meets directors Ryuhei Kitamura (Versus) and Mamoru Oshii (Ghost in the Shell) and surveys the current crop of Japanese films, including the strange tale of a giant squid turned championship wrestler.

KOREA
Many critics consider Korean cinema to be the most exciting in the world today. Among the directors Jonathan meets are Park Chan-wook, whose film Oldboy won the Grand Prix at Cannes in 2004. He also looks at an extremely odd little monster movie produced by North Korean dictator Kim Jong-il who kidnapped the film's director from South Korea to make his dream project.

For full descriptions of each episode and the films featured in them, visit the BBC4 site.

Also be sure to check out the series Mind, Body and Kick Ass Moves that kenada also has posted. Expect a blog entry on that in the future.

NOTE: Just watched the Japanese episode and there are a number of what I would consider "spoilers", especially for the Miike films, so proceed at your own caution!

Oh they now how to do it in Berlin. When attending the Berlin Film Fest and European Film Market last year, I snapped this pic in a staircase in one of the cinema buildings in Potsdamer Platz: 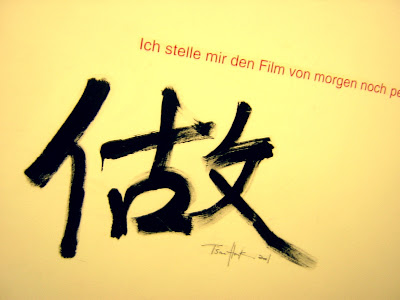 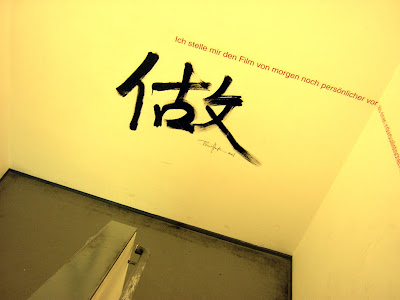 And on YouTube, you can now watch the the TV show that helped further turn me on to Hong Kong cinema. I owe Jonathan Ross a drink!