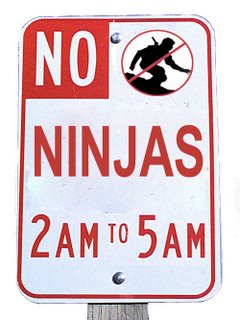 Sure signs that you have a ninja infestation? Trails of wasabi in the kitchen....

this one goes out to the The Silver Fox

Looking through my blog stats the other day and found that people search for the strangest things on google, like the number of hits that I get from searches for "are you ready to get your guts kicked out", that pulls up one of my early postings relating to DJ Shadow and a super-8 film in my collection.

This next image goes out to the fella who found my site doing a search for "Silver Fox"! Anyone know where the State was? What a great tagline: "Where The Action Is!" I did a search for that and nothing to exciting came up. Funny how some people's definition of "action" is "computer science as an engineering discipline"... 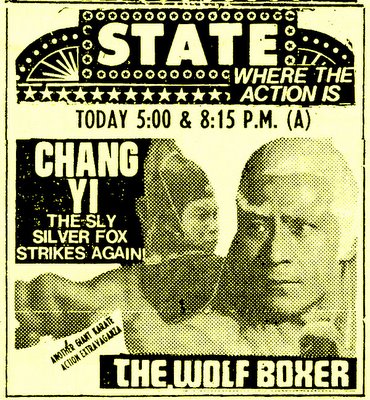 Note - After posting this, a message came in from Lars Erik Holmquist, high priest of the Göteborg, Sweden chapter of the White Lotus Society of HK Fandom:

It's hilarious that you pick on Paul Dourish's book WHERE THE ACTION IS on your blog! It happens to be a very important book for me and my colleagues but it's also very dense, and very philosphical. A KARATE ACTION EXTRAVAGANZA it certainly is not.

From the winner of our first monkey contest, UK blog reader Matt (and your prize CD is in the mail today), come these ape pics from the Shaw Brothers film THE BATTLE WIZARD:

"I've attached a some kung fu gorilla stills from the Shaw Brothers movie Battle Wizard which you might be interested in (I mentioned them in my comments for your first Dirty Apes post). Quality is pretty poor as I nabbed them from my burnt out Arabic (and English dubbed) VHS - but I'm pretty sure the film has been released on DVD by Celestial. Either way, there's got to be better images out there.

No-one comments on the gorilla's apparent kung fu expertise though - perhaps skilled martial arts monkeys once roamed all over ancient China, so it's not a big deal...." 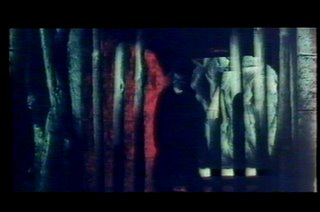 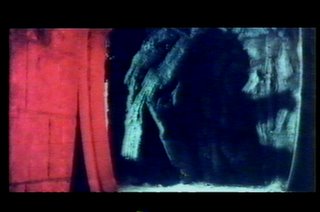 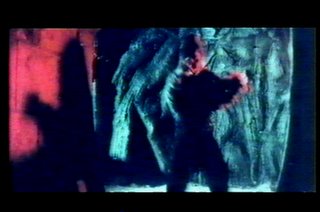 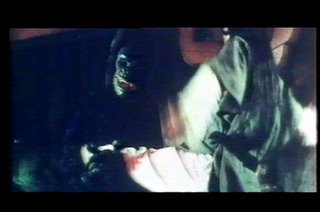 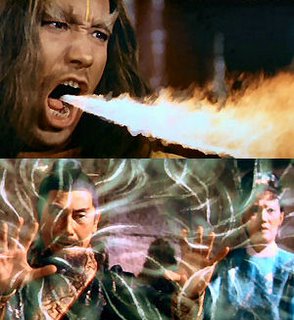 I've only seen the trailer for this one and it looks soooooo crazy! Anyone chime in with comments on this one? I have some downtime coming up this week, so maybe I'll pop this dvd to the top of the pile. Check out the review at kungfucinema.com (where the pics below came from)

The poster and magazine images are via hkmdb.com (three cheers for Ryan and his fabulous reference site!)
Posted by Colin at 12:40 PM No comments:

I have landed the final fatal blow...

Write ups are done! Procrastination defeated! And the schedule is posted! What is coming soon to the temple that is the Revue Cinema in downtown Toronto? For starters...

and if you need some muzik to procrastinate to...

One last thing til I nail these write-ups for the March calendar - let me share this massive and amazing remix project that I discovered on Record Brother's blog, three volumes that adds up to over 4 hours of blaxploitation soundtrack and dialogue! Now there is a soundtrack to write descriptions of bone crunching action! Download, listen, enjoy and drop Record Brother some comments of thanks!

I'm at the studio in a fit of procrastination as I should be writing the copy for the next two Kung Fu Fridays. Let me justify it by sharing these two links with you.

Every day or so, I have a number of links bookmarked that I pull up and then browse through for new updates (thanks to the "open in tabs" feature). One of my fave spots to go is earnest little cartoon guy, which is a photographic reference to cool spots. Rather than blather on about the content – as I find myself doing now – he just lets the images speak for themselves. Here are two links that he has turned me on to: 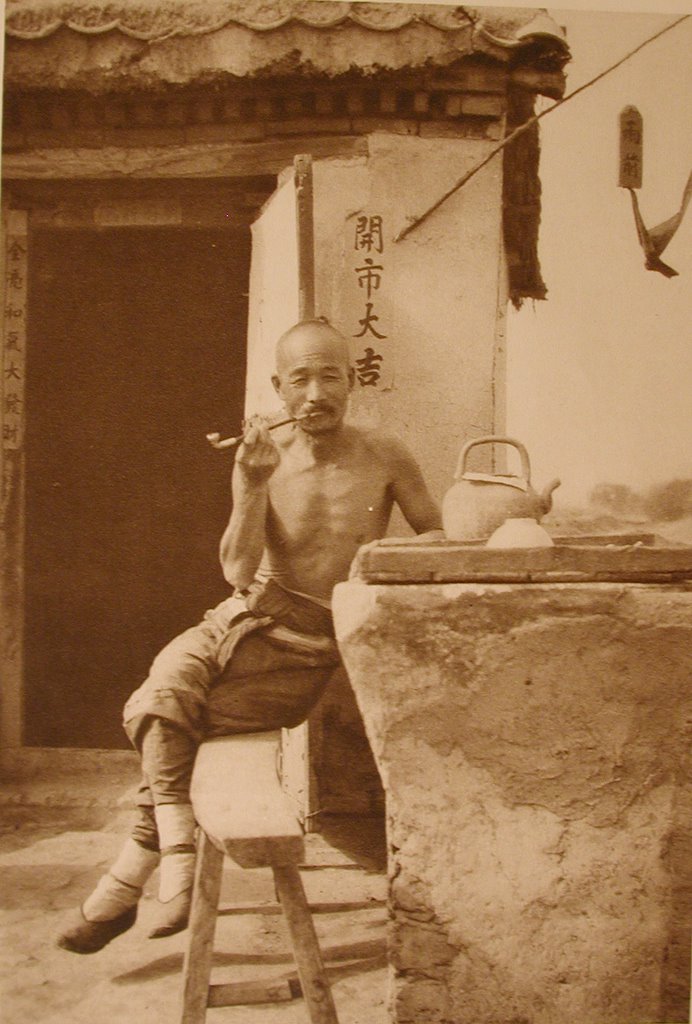 a gallery of photographic images from old Beijing

with the handgun frenzy in Toronto right now, maybe looking at the commerical roots of the issue might help with solutions. here are images of the selling of gun culture through the 20th century. If only the white lotus clan WERE impervious to bullets... (earnest guy link)
Posted by Colin at 1:24 PM No comments:

read the The Telekino Times-Picayune

Let me briefly introduce a new link over to the right of the page - the blog of Toronto based infotainment guru, Jesse Hawken, The Telekino Times-Picayune. Read about his journey into the Chinatown Dollar Mart, that resides under a now closed cinema that was known in previous incarnations as The Victory Burelesque, The Golden Harvest, The Pearl and lastly, The Mandarin. 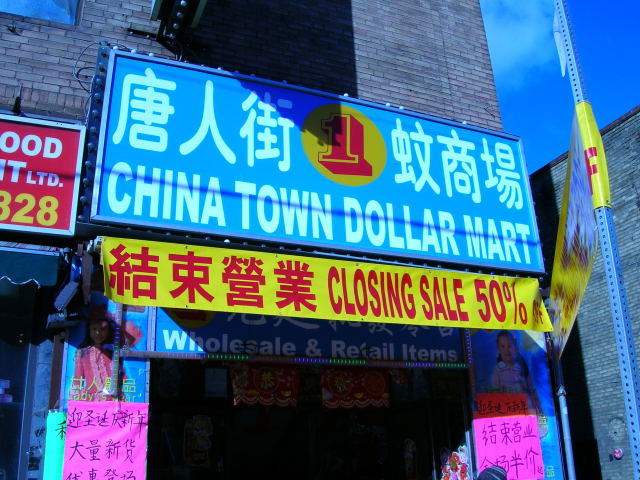 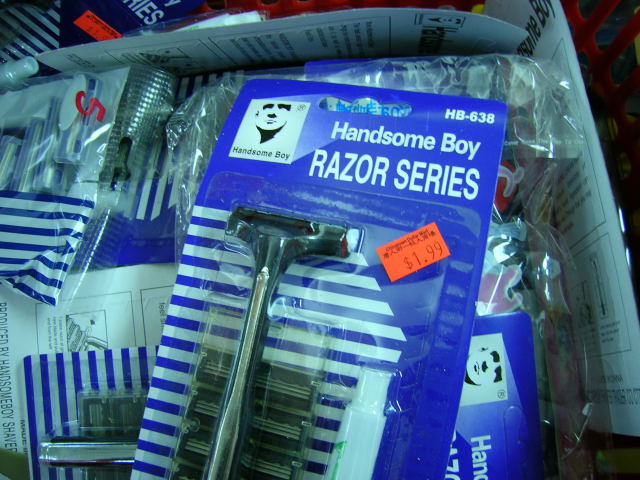 Another urban exploration is looking back at the long forgotten cinema housed in the Toronto Dominion Centre in the heart of Toronto's financial district. 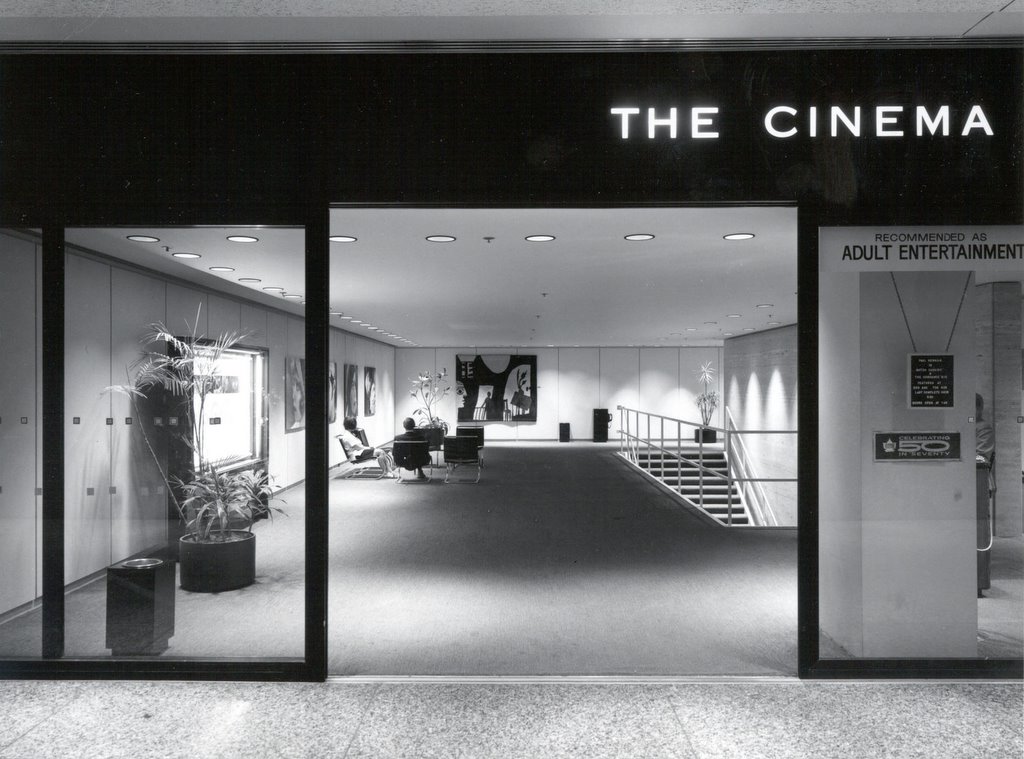 And yes, Jesse, is a Kung Fu Fridays disciple and his sifu is Tom Vu.
Posted by Colin at 5:53 PM No comments: 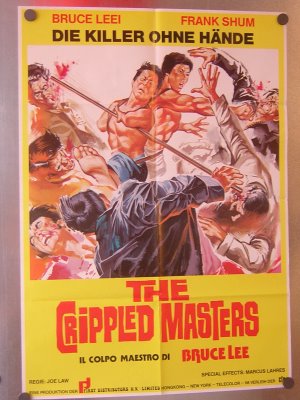 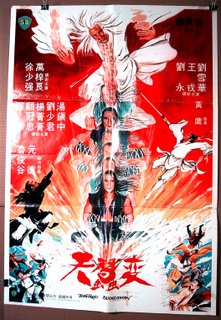 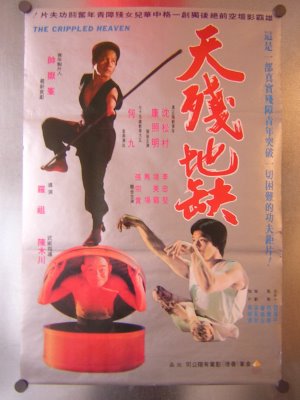 and while I am rooting through my image folders, how about this one? The translated title is: "THE FIVE SISTERS OF BRUCE LEE" however, a Babel Fish translation gives sez BRUCE = BRUSH! Yes, behold THE FIVE SISTERS OF BRUSH LEE!!!!!! What chamber of Shaolin teaches you how to kick with heels like that! 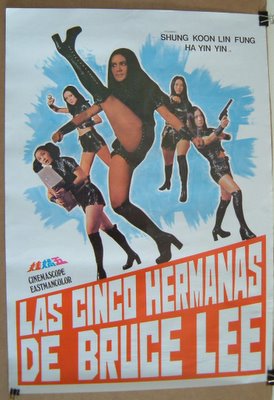 2/6/06 - from the comments section comes this observation by Poptique: "This is also known as Five Black Heroines and somewhere I've got an Ocean Shores VHS of it called "Bruce, Kung Fu Girls". Suffice to say, there's no reference to Bruce Lee at any point during the movie - it's a goofy Taiwanese tale of a five strong team of leather-clad ladies taking on a dastardly villainess who’s discovered the power of invisibility. Oh - and they only manage to squeeze them into those crrrazy S&M outfits for a couple of scenes. "
Posted by Colin at 1:04 AM 5 comments:

Sorry, no contest this time. I came across this poster today while surfing and was wondering what it was for. Italian posters have terrific artwork and I am sure it does not reflect the actual film. Who is the guy on the wall? Spidey Sense Fu! (click on it to see it bigger)