Big thanks to Carol for pointing this one out to me. I realize that I don't read and talk enough about the great work Jean Lukitsh does with the Electric Shadows blog entries over at Kung Fu Cinema. It's always a source for regualr and in-depth postings. Some recent subjects have been:

The Tai Chi choreography of Yuen Woo-ping, Part 1
Dressed to Kill: The Films of Lily Ho
The Real Deal: Donnie Yen and the Fu Legacy
The Magical Life of Long Tack Sam
(That one's a Canadian film! It is my patriotic duty to point that out)
Magic Taoism: 'White Bone Yin Yang Sword, Part 1
The Heroine Yu So-chau

And then there is this AMAZING gallery of posters/handbills for the old Kwan Tak-Hing Wong Fei-hung films. Be sure to check it out. I am only showing two of several images Jean has posted. I would so buy t-shirts of these film titles. Just a simple one colour screen would look so cool. And the translations of some of them are terrific. I'd pay for a ticket right away based on them! 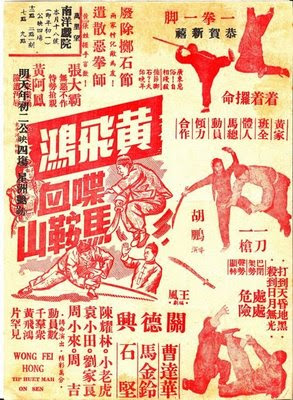 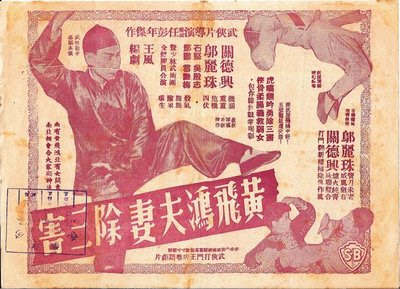