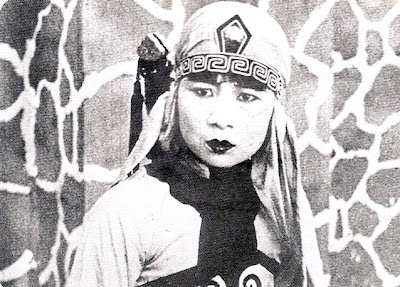 Have you ever seen a silent martial arts film? Until I read about RED HEROINE last year, the thought that such a thing existed hadn't even crossed my mind. Thankfully a group of Portland musicians called Devil Music Ensemble read about RED HEROINE and having toured performing original live scores to silent films before, thought that doing so with the only surviving martial arts film from Shanghai's golden age of silent cinema would be a worthwhile venture.

Even though it was released in 1929, RED HEROINE still hasn't screened in Canada. On Friday, that's going to change when it screens on Friday, November 13th at the Royal Theatre (an old home of Colin's Kung Fu Fridays screenings) as the Centrepiece Presentation of the Toronto Reel Asian International Film Festival, co-presented by Ultra8 Pictures and Over the Top Fest. Reel Asian starts on Wednesday and I'm looking forward to the films on Wednesday and Thursday but Friday cannot come soon enough!

You can buy tickets to the screening right here!

For one night only! – This year’s centerpiece Red Heroine is a rare screening of the only surviving silent martial arts film of its era, and includes an original live music score influenced by Chinese folk music and cult classic Kung Fu film soundtracks by the Boston band Devil Music Ensemble. This tapestry of ancient martial arts tradition, early-20th-century Asian film and 21st-century music breathes new life into a film treasure that dates back from the earliest boom of wuxia (sword-play) films, long thought to have been lost.

Banned in China after the Cultural Revolution, Red Heroine (Hong Xia) was made at the height of the martial arts craze in Shanghai (1920s–’30s) and is the 6th episode of a 13-part serial. It tells the story of a young woman, Yun Mei (“maiden of the clouds”), who is kidnapped during a military raid that decimated her village and killed her grandmother. Later rescued by a mysterious Taoist hermit, White Monkey, she trains in the mountains for three years, learning the art of hand and sword fighting, along with powerful magic.

Meanwhile, the villagers continue to suffer under the corruption and tyranny of the Western army. Yun Mei, now transformed into a resolute warrior, returns with White Monkey to exact revenge and fight back!

RED HEROINE and Devil Music Ensemble are also playing in Ottawa on the 14th and Montreal on the 15th. Visit DME's site for more info.