Sorting through old files of visuals that I collected and planned to use for clip art back when I was putting together my zine Asian Eye and discovered these tickets from the now closed Chinatown cinemas. These scraps of paper represent my experiences watching such films as: Armour of God 2; Spooky Family; Once A Thief; The East Is Red; Fong Sai Yuk; Hard Boiled; Once Upon A Time in China I & II; Story of Ricky; High Risk; Full Throttle; and several other not so memorable films.

I really miss those places. Cheap double bills. Exotic snack foods. The steep stairs leading up the the balcony entrance at The Peral (previously The Golden Harvest and later The Mandarin). Kids racing around the aisles oblivious to the insane violence unspooling on the screen. Going to late night Chinatown noodle shops to recount what we had seen. Being the only gweilo in the theatre. The old table top Pac-Man game in the lobby of The Far East. All gone. Nostalgia. 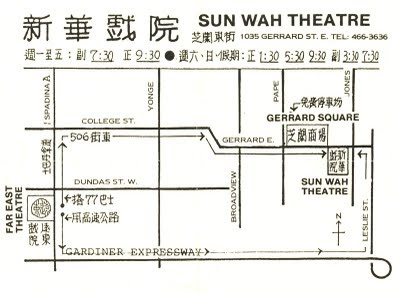 I totally resent that I missed out on the era of these theatres in Toronto.

You captured it perfectly...

Some great memories: A Better Tomorrow III at The Pearl, Eight Taels of Gold and Legend of the Phoenix at the original Golden Harvest (before you reopened it), Sex and Zen at the Far East, Chungking Express at the Mandarin and on and on (wipes eyes).