maybe he thought the invite said, "Drunken Master of Ceremonies"

From my secret source in TST/Kowloon comes this scandalous report...

"Some of you might have read that Jackie Chan made a clown of himself the other night by getting up onstage at a concert he attended and swearing at the crowd, singing songs, and so on. All the English language stories so far printed online have left out the juicy details such as him saying "Fuck Your Mother" to the audience. This is the Chan that HK people see, but that isn't seen by the outside world! This story is translated from local Chinese press..." 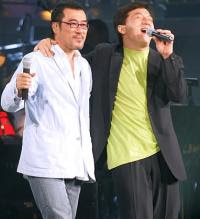 Jackie Chan angered the public by making himself a clown on Monday night while appearing at his long time Taiwanese singer song-writer friend Jonathan Lee's concert at the Hong Kong Coliseum.

Chan invited himself and turned up on the stage towards the end of the show, obviously drunk, started swearing right at the beginning. "I rarely show up at this kind of occasion drunk. But tonight I'm really drunk. Fuck [diu, lei lo mei, another version of fuck your mother in Cantonese]...Oh damn I just swore," he said.

The crowd was stunned. Chan then quickly explained that he just entertained some 20 Japanese friends and drank a lot. "What did I say? I can't quite remember. Damn I'm really drunk...I have to apologise," Chan said, then bowed to the audience. He continued: "I apologise to everybody. I shouldn't be on stage drunk. But I know that if I made a fool of myself, you guys will be happy. So I'd rather make a fool of myself."

After singing two songs, Chan still had no desire to leave. He wanted to sing one more song but the audience was getting impatient. Some members of the audience began swearing at him and saying something like: "Go home", "Very irritating" and "Shut up". But Chan acted as if he heard nothing. Then his singer friend Lee began looking at the watch and it angered Chan. Chan said: "Why are you looking at the watch? I'll pay [for the fines] if the show over runs. What do you look at your watch all the time?"

Then the band began to play, but Chan shouted at the band: "Shut up! You play music only when I tell you to! Now we sing 'Chun Sum Ying Hung' [True Heart Hero]"

Then Chan acted like an orchestra conductor and the keyboardist began playing. However, that angered Chan too. "How arrogant! I haven't even started to count one, two, three! Where do you come from?" he shouted. Audience then booed when he started singing.

After singing the song, Chan apologised to the audience and said: "We thank Jonathan for coming to MY concert." Then he said: "I've disturbed your show. Thanks to Jonathan for letting me come on to the stage. There was a crazy man out here." The show was over run and fined for HK$40,000.

When Chan was about to leave the show, he was interrogated by journalists and apologised. "I'm really ashamed of myself. I'm so sorry," he said.

But the next day, Chan denied that he was drunk on that night. However, his son Jaycee Fong was embarrassed by his father's stupidity and apologised. "I hope this will not happen again," Fong said.

The public was offended by Chan's stupid action as Chan was chosen by the Hong Kong Tourism Board as the ambassador. They feel that the incident did make Hong Kong look bad internationally.

The Tourism Board said that they were very concerned with the incident and has been trying to get in touch with Chan's management. But the board refused to comment on whether Chan's incident would affect Hong Kong's image.

Classic.The guy risked his neck for the world's entertainment for thirty years.If he feels like getting sauced and acting retarded in front of a crowd,who the hell am I to argue that?I only wish I had access to a crowd that large,I'd make his shenannigans look paltry in comparison.Haha.