a great double bill for a hot date?

Thanks to all who came out for the Kung Fu Fridays show of BLONDE FURY tonight. Any feedback? The humour is a little overwhelming at times, but when the action kicks in, the audience gasps and cheers makes the film! And what about the scene where the Thai leg fighter gets Rothrock's heel buried in his leg and then she starts pouning on his wound! Yeouch!

One of the special things about the Kung Fu Fridays series, is that there is really nothing else like it in this city. Not trying to pat myself on the back, but I feel nostalgic for a time and place that I was unable to enjoy --- being able to see fun kung fu, horror, action and trash flicks in Toronto cinemas in the 70s and early 80s. Growing up in the country didn't offer me much of a chance at that. Seems like the state of cinema in this city has devolved, but that is due to changing home cinema tech and dvd consumerism. Poor rep houses like the Bloor, Paradise and Royal try and show older titles, but the audiences that come out are often disappointing (6 people at FITZCARALDO at the Paradise). Enough of my whining! Let me share a clipping that I found that is topical, especially after I talked to and audience member about MASTER KILLER and sayiing hello to dear friend and zine mentor Hal "Trash Compactor" Kelly...

This clipping is for an old Chinese run cinema at around College and Bathurst in Toronto which is now either a paint or a computer store. Not sure what the date of it is, but maybe 1986-ish? What a double bill!

And of course, Gung Hei Fat Choy! Happy Year of the Dog! 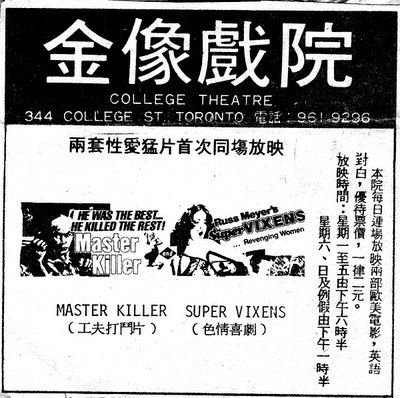 On BLONDE FURY , I enjoyed it as plot wise and acting is cheesy and the translations even the english ones were at times off but funny as always - I love to see a blonde go to work Hong Kong style , my friends also enjoyed the movie as well and fun to laugh along with a crowd.

The bit with the broken heels was amoung my favs. Have not seen High Heels play such a pivital sceen in women fighting since the two street walkers in Robocop go to town for some Nuke!.

Other things that stood out in the movie such as the american must chow down on the Mc D's I guess to prove she is an american,

I also enjoyed her statement about USA and forgien policy which is relivant today and prob the strogest bit of writing in the movie - well that and the bath tub bit the two ladies ;)and bad translation and banter between the two.

And wow, sadly I have never seen FITZCARALDO nor did I know it was playing :( after reading more about FITZCARALDO it looks like it falls into my kind of movie that I try to search out as often as I can as most of what hollywood churns out leaves me feeling dirty.

The problem with the local group of festival cinemas servings is that as in my case many ppl have not heard of whats playing or are affraid to take a chance on something they are not certain about.

The Group of Festival cinemas have suffered over the years in this city , and I am sadly reminded of the loss of THE UPTOWN - which by far my most favorite of cinemas in the city and host to many firsts and love of movies. Often allowing me to see many things that I was too young to see on the big Screen as well , something like "Raiders of the Lost Ark" ( which by the way is playing at The Bloor in Febuary ) at the time it came out (1981 I think) I would have been wee near 5 years old.

Sorry man , am rambleing as well . The long sort of it is Keep up the good work with Kung Fu Fridays as I enjoy them would love to see some Cult Thursdays return as well, need to get some new blood to see some good movies , and the world would be a better place - lol

Sorry we missed this. Pauline's back was playing up and she decided she couldn't sit through a whole movie. Ms. Rothrock almost always guarantees a good time.

Yes, KFF is something to treasure and support. We're very grateful that you choose to spend your valuable time adding to the cool things about Toronto, both with KFF and Ultra 8.

With regards to the rep houses, its true that the convenience of video is the primary culprit in killing off the audience for older movies, but I'd add that Festival Cinemas is generally not very good at publicizing their screenings to the casual viewer. Also, they've shown so many utterly dreadful prints over the years (admittedly, sometimes the only prints that were available) that I've become very wary about taking the chance when they do show something I haven't seen yet. Compare to Cinematheque, which has a healthy audience, top notch projection and generally very good prints backed by actual marketing. Of course, I realize that Cinematheque has a deeper pool of resources to draw from, being an arm of the TIFF group and all, but still, I know where I usually choose to spend my time when I have to make the choice. If they had hot popcorn and a real theatre instead of a stuffy screening room, there'd be no contest.

Which isn't to diss Festival Cinemas -- I love 'em and continue to patronize them, I just tend to be careful about what I see. I love the feel of old theatres like the Royal and, yes, even the divy environs of the Paradise and am very happy that they take chances on things like Kung Fu Fridays.

Great work on Kung Fu Fridays, a reminder the best place to see films is the big screen. You guys complain that Toronto is bad in rep scene, look at Montreal. Montreal has been reduced to 1 reportoire cinema. It's not even a rep since it's mostly new films(from smaller studios)and independent film. Nothing against indie, but where's Barbarella or Sergio Leone in 35mm every few months to remind us that DVD still doesn't compare.

Our Cinemathque shows boring films that put you to sleep. The seats are super comfortable to reinforce that we get extra Zzz. But they get a generous amount from taxpayers.

The 70s and 80s were the best times for kung fu films esp in TO and Montreal.(I'm sure around North America, but was too young to travel) Every week, double features.(one new film, one old one) 3 screenings(2 films) on Mon-Fri and 5 screenings(2 different films) on week-ends. You can stay the whole day with 1 ticket.

I think the word DIGITAL has been ingraved into people's head, that if it ain't digital, it aint cool.
The picture has to be perfect.
It's great that all the technology can do wonders with restoration. But a pity these new prints don't circulate too much.

You guys are lucky to get Raiders. They haven't showned that film here for 3 years. The attendance as strong too 3 years ago.