On April 5th, as part of the fab Wright Stuff series at Toronto's Bloor Cinema, director Edgar Wright presented a 35mm print of Jackie Chan's POLICE STORY followed by the US version of DRUNKEN MASTER 2 aka LEGEND OF THE DRUNKEN MASTER. I had not seen that projected in years, but each time I has seen it previously, it was the Chinatown HK print and was shocked to see this verion with all the Wong Fei Hong theme music stripped out of it. A travesty! 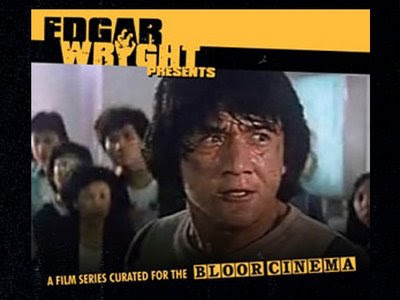 Edgar is currently in town shooting SCOTT PILGRIM VS. THE WORLD based on Bryan Lee O'Malley's graphic novel and had been presenting cool flicks on 35mm for the past few Sundays. I was able to add to the experience by including in the evening's show a number of my rare 35mm trailers including FIST OF FEAR, TOUCH OF DEATH, BREAKIN', ZEN KWAN DO STRIKES IN PARIS, and in Shaw-Scope - THE SUPREME SWORDSMAN and RETURN TO THE 36TH CHAMBER!

Here is Edgar's introduction for POLICE STORYcaught from the first row of the cinema. Sorry for the craptastic sound quality. Big thanks to Edgar for being the real deal - a dedicated lover of fantastic film.