Didn't we tell you about the 36 and a half chamber? 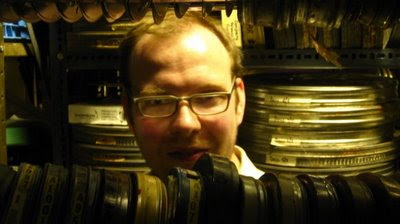 Bow your heads, chant the secret mantra of inner strength and welcome a new member to the Kung Fu Fridays blog – Jeff Wright! An experienced blogger and Asian film freek, I think he'll make himself right at home in the temple. He is currently in Montreal attending Fantasia this week and we hope to get a few posts from him.

Need to know more about the newest disciple? Read on!

Jeff Wright is a Toronto-based musician, writer and professional film buff. After retiring his critically acclaimed and controversially-conceptual band Shit Wizard in the mid '00s due to the tour related difficulties of having members in Japan, Iceland, and France, Jeff turned his attention to film full time. Jeff is a frequent contributor to Filmcatcher.com and a founding editor of the film review blog They Shoot Actors Dont They. Jeff also curated the film component of the 2008-09 Over The Top Festival in Toronto, and looks forward to doing more programming in the future. 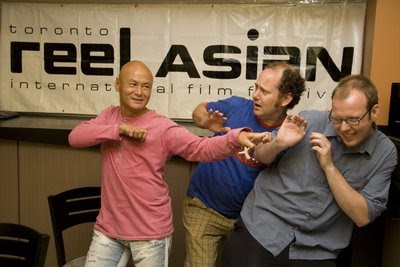 (And for all our stalkers, I am the dude in the middle and Jeff is the one on the right. And if you don't know the killing machine on the left - FAIL)
Posted by Colin at 3:57 PM