fists of fury at the Cinematheque 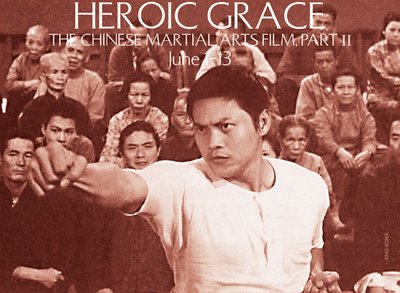 Well, despite the last gasp of Kung Fu Fridays on June 23rd, there is a reason for fu fans in Toronto to celebrate. Starting June 1st at the Cinematheque Ontario is a series of 10 classic fu flick that I helped select. These are very rare screenings and is a must for Shaw fans. They will be screening the film the most requested by Kung Fu Fridays disciples, THE FIVE VENOMS as well as many other classics... Read on grasshopper...

Zhang Che revisits the premise of his epochal ONE-ARMED SWORDSMAN (1967) but with a gruesome difference. David Jiang portrays an arrogant warrior humbled by a nefarious opponent and forced to hack off his own arm. Years of waiting tables fortify his single-handed dexterity, but what finally launches him back on the path of bloody retribution is the untimely death of his comrade Di Long. The actors were Zhang's preferred pairing of heroes in his '70s films, and like other of the director's films about male bonding, THE NEW ONE-ARMED SWORDSMAN is charged through with latent homoeroticism. Fuelled by the estimable action choreography of longtime collaborators Tong Kai and Lau Kar-leung, the film builds to an astonishing finale traversing the entire span of a bridge and then some.

This brutal fight film adapts the proverbial rise-and-fall gangster formula to the mean streets of '30s Shanghai. Chen Guantai is a poor hick from Shandong ("Shantung" according to the old Wade-Giles romanization) whose fearsome boxing ability allows him to muscle his way to the top of the Shanghai underworld. Bursting with typically Zhangian bloodshed and distinguished by Chen's authentic kung fu technique (the film proved to be the actor's breakout vehicle), BOXER also features Shaw luminaries David Jiang as a charismatic gangland don and Jing Li as a principled songstress. Among its highlights that have inspired a host of imitators: an iconic match between Chen and a Russian wrestler, and ruthless hatchet-wielding thugs, most recently revived as the "axe gang" in Stephen Chow's comic tribute to the martial arts cinema, KUNG FU HUSTLE.

King Hu's kinesthetic poetry gets distilled to its essence in a late masterpiece suffused with a deep sense of melancholy. Set characteristically for Hu in the Ming Dynasty (14th-17th centuries), THE VALIANT ONES refers to the crack team—including a coolly enigmatic swordsman (Bai Ying) and his taciturn wife (Xu Feng)—assembled by military strategist Roy Chiao to defend the Chinese coast against Japanese pirates. Tantalizingly abstract in its fight choreography—action is expressed in calligraphic strokes such as the brief clanging of blades, the whizzing-by of arrows and the rhythmic flight of bodies—the film is nevertheless majestic in its evocation of landscape. But unlike the preternaturally gifted heroes of most swordplay films, Hu's valiant ones are mortal. His "Picture of Valor" (the film's Chinese title) is ultimately ironic; its somber resolution undercuts any triumph in victory.

Chu Yuan continued his cinematic transmutation of the Gu Long literary oeuvre with this gripping wuxia "whodunnit" set in the timeless realm of martial chivalry. Famed swordsman Chu Liuxiang (Di Long) is framed for the murder of three clan chiefs. Leaving behind leisure and connoisseurship—a resplendent houseboat and poetry-spouting friends—Chu embarks on an investigation that leads him from a mystery woman to Buddhist monks and a grotto-dwelling clan of female fighters led by a lesbian (Betty Bei Di). Gradually he uncovers a convoluted conspiracy that culminates in an unforgettable gender-bending twist. Fantastical and fringed with risqué sexual flourishes, CLANS OF INTRIGUE is echt Chu, a baroque martial arts saga replete with artifice and larger-than-life archetypes engaged in elegantly choreographed mortal combat.

Chu Yuan's penchant for labyrinthine plotting reaches its zenith in this dizzying adaptation of the Gu Long source novel. Di Long heads an all-star cast as a Zhou warrior catapulted by the threat of his father's decapitation, delivered on his wedding day, into the middle of a no-holds-barred war between his clan and the Tangs. The outrageous characters, exotic weapons and proliferating layers of subterfuge are hyperbolic even by the standards of an already excess-saturated subgenre. Chu's characteristic visual splendor contributes to the air of delirium, but a self-conscious pathos about the futility of martial rivalry lends the film thematic ballast and anticipates the reflexive tone adopted in the melancholy wuxia by the Hong Kong New Wave of the '80s.

Long a favorite of martial arts movie fans, THE FIVE VENOMS was the defining showcase for late-career, all-male-ensemble Zhang Che. The dying master of the Venoms House tasks his one remaining disciple to bring to justice the young man's five predecessors, now dispersed and fallen into ignominious criminality. The elder Venoms quintet, however, possesses formidable skills, each in a distinctive fighting style: scorpion, snake, centipede, gecko and toad. The youngest Venom locates them in a small town, and in this nexus of gold loot, shady cops and corrupt judges, a suspenseful mystery plot unfolds, punctuated by some of the most lucidly articulated and imaginative fight sequences of the martial arts cinema. Uncharacteristically—and unlike even the previous Heroic Grace selection, BLOOD BROTHERS—Zhangian brotherhood is rent asunder by greed and betrayal among men.

Fighting without seeming to fight—that's the ingenious premise at the heart of this dazzler by martial arts grandmaster Lau Kar-leung. The director's mainstay Gordon Liu plays a prodigal prince (and hyper-cultivated epicurean) targeted for assassination by his elder brother. Enter Wang Yu (not to be mistaken for the star of ONE-ARMED SWORDSMAN) as the eponymous Ho, a boisterous ruffian who reluctantly apprentices himself to the expert Liu. With the killers disguised as a wine merchant and an antiques dealer, the prince finds himself parrying dangerous kicks and blows while in art appreciation mode. The climactic fight-back-to-the-palace pitting prince and apprentice against a battery of swords and arrows is a set piece for the ages. Like the title it belies, this movie about the art of the martial arts brilliantly distills its director's penchant for discoursing on the beauty and rigor of a genre that's clearly more than chopsocky.

A young widow (Kara Hui) arrives in Guangdong to deliver a fought-over deed of inheritance to the rightful heirs, her crotchety nephew-by-marriage (Lau Kar-leung) and his westernized son (Xiao Hou). Age and gender role reversals allow for a wealth of kung fu funny business: the nephew is easily twice as old as the aunt but still bound to respect family hierarchies; the fetching aunt has serious warrior chops despite her traditionally feminine appearance. Freely mixing martial arts moves with allusions to popular Hollywood genres (musicals, swashbucklers and even war movies), MY YOUNG AUNTIE is an unalloyed triumph of kung fu comedy. Hui delivers a winning performance as the woman who unsettles the standard teacher-student paradigm of Lau's oeuvre.

Tsui Hark takes on the popular Wong Fei-Hung (Huang Feihong) legend in this rousingly revisionist film, the first in a six-part series that re-imagines the martial arts paragon for the wuxia-meets-kung fu "wire-fu" action of the '90s. A Jet Li in peak form summons a whirling arsenal of "shadowless kicks," somersaults and leaps to repel the incursion of opium and slave trading by corrupt Westerners into China in the 19th century. The film makes room for grand historical drama and slapstick comedy, sumptuous period décor and whimsical romance, but is best remembered for its virtuosic choreography of combat, most famously the breathtaking fight to the death atop bamboo ladders.

All Cinematheque Ontario screenings are held at the Art Gallery of Ontario's Jackman Hall, 317 Dundas St. West (McCaul Street entrance), Toronto. Regular tickets are $6 for Members; $5.50 for Student Members and Seniors; and $10.10 for Non-Members. Limited Runs and Special Presentations are $7.25 for Members and $11.50 for Non-Members. Cinematheque Ontario Lecture Series tickets are $10.25 for Members and $15.50 for Non-Members. All screenings are restricted to individuals 18 years of age or older, unless noted otherwise. The Toronto International Film Festival Group Box Office is located at Manulife Centre, 55 Bloor Street West (Monday to Saturday, 10am - 6pm).

For more information call 416-968-FILM or click, bell.ca/cinematheque.
Posted by Colin at 1:45 PM

Do you know if these prints are going on a world tour, just like the first Heroic Grace season?

All the screenings I managed to catch at London's NFT were packed out, and that is a seriously solid line up...