Before turntable specialists like DJ Shadow (see previous post) made sampling an artform, the Hong Kong film industry beat them to it liberally lifting scores from other films and splicing them into the soundtracks of chop socky flicks. When watching fu flicks you can hear looped snippets of John Barry (007), the Imperial theme from Star Wars and of course, Ennio Morricone and other Italian western soundtracks. 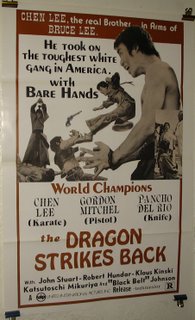 That leads us to the great collection of Spaghetti Western soundtrack compilations that Kung Fu Fridays friend Klaus Kinski Jr. has posted over at his blog. Curious about classic Spaghetti Westerns? Obviously, check out the Sergio Leone classics, but also try and watch DJANGO, as recently reflected on at Menooshea's blog, THE GREAT SILENCE, COMPENEROS or RUN, MAN, RUN for starters. There are loads of them out there, but not all are worth attention, plus many are unavailable in North America, like my personal fave, FACE TO FACE. And sadly, there has not been a release of FISTS OF SHANGHAI JOE aka THE DRAGON STRIKES BACK, the cover above, one of the kung fu/spaghetti western crossovers like RED SUN or THE STRANGER & THE GUNFIGHTER. Ahh, poor SHANGHAI JOE. One can only hope...
Posted by Colin at 9:18 PM

Well I want to see this Sherlock Holmes Kung Fu film I saw clips of from a BBC documentry. THink its called the case of the Chinese Herione takes place during the boxer rebellion. Plus they rip off blantly from Indina Jones in some scenes.

i'm awful fond of the repeated use of the battlestar galactica theme.